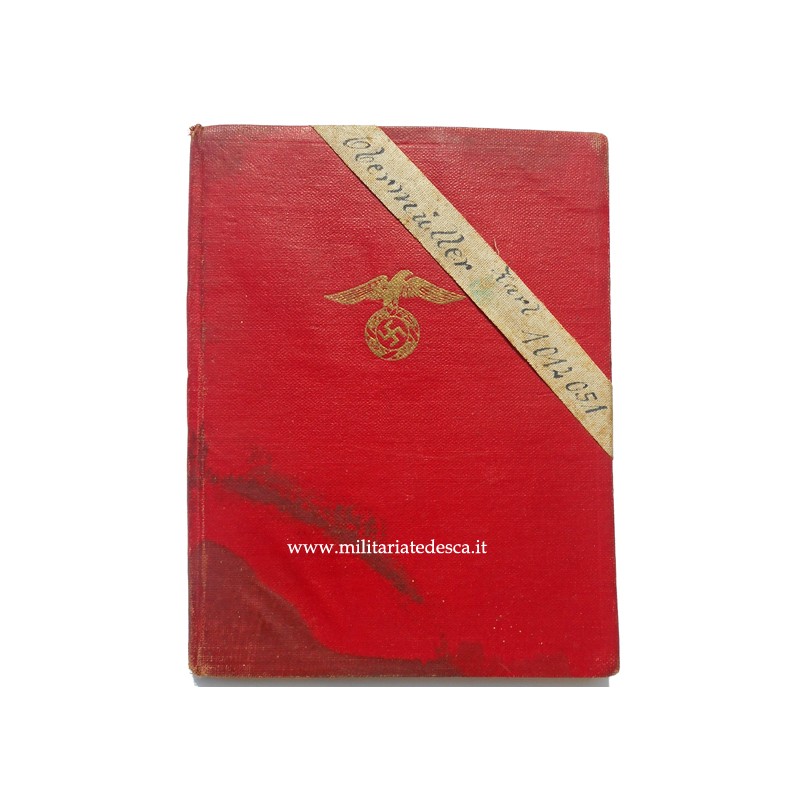 Rare original first type (1933) N.S.D.A.P. membership book, in excellent condition, complete with original photo and stamps from 1932 until 1939. The initial pages show the Führer introduction and the list of all the fallen on November 9, 1923.
The booklet is characterized by the first type emblem printed in gold on the red cover, with the eagle with open and lowered wings and a swastika of considerable size, which was then replaced by the much better known one with the eagle with horizontal wings and a smaller swastika. On the back of the second page, a small ticket from the SA Gruppe Hochland has been attached, which indicates the promotion to Obersturmführer (Lieutenant) of the SA of the owner Karl Obermüller.
The owner of this booklet was born on December 29, 1897 in Bad Tölz where he resided and joined the Nazi party on March 1, 1932. His registration was officially approved on April 19, 1934 in Munich.
The rarity of this booklet is increased by the presence of all the monthly stamps, applied on the specific pages from 1932 until March 1939. The booklet is made up of 48 pages. The final part is reserved for the guidelines and purposes of the National Socialist movement and for the obligations deriving from belonging to the ranks of the members of the N.S.D.A.P.
From other sources of information it was found that Karl Obermüller had reached the rank of Hauptmann (Captain) of the Army (Heer) and that he fell on the eastern front on December 10, 1942, in Surowikino in Russia. To date, his remains have not yet been found since the place of his burial is unknown.