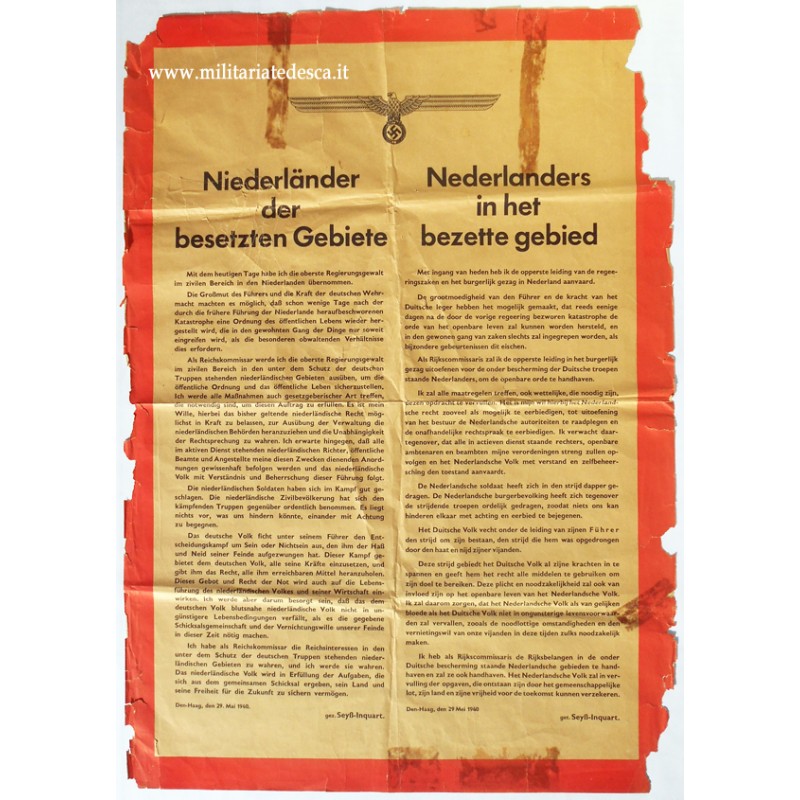 Here is something, I would say, almost unique.

A survived poster of the Netherland occupation by the Germans.

Poster, used in 1940 after the german invasion, is bilingual, in german and dutch languages, and is titled: "Dutch in the occupied territory".

It is a german ordnance in which the Governor for the Nederlands expects full cooperation from Dutch judges and police. It also solemny promises to uphold Dutch laws and the rights of the Dutch people, so that they will not be worse off than that were before (but this did not include the rights of dutchmen of Jewish ancestry).

The poster is dated Dan Haag, May 29, 1940 and it is signed by Arthur Seyss-Inquart.

Arthur Seyss-Inquart was an Austrian Nazi leader that served as Reichsstatthalter (governor) of the Austrian provincial administration until April 30, 1939. He was later appointed deputy governor in Poland and eventually Reichskommissar (commissioner) of the occupied Netherlands, where he was chiefly responsible for the establishment of a system of terror, the shooting of hostages, extortion, and the mass deportation of the great majority of Dutch Jews (approximately 120,000 people), mostly to Auschwitz. Following the defeat of Germany in World War II, he was tried and executed as a war criminal at Nürnberg.

Poster has some missing parts on the edges, please see pictures, and some tears, but it has all the text. It is in big size, it measures 80 cm x 55 cm.

A really unique piece of history that survive until today.