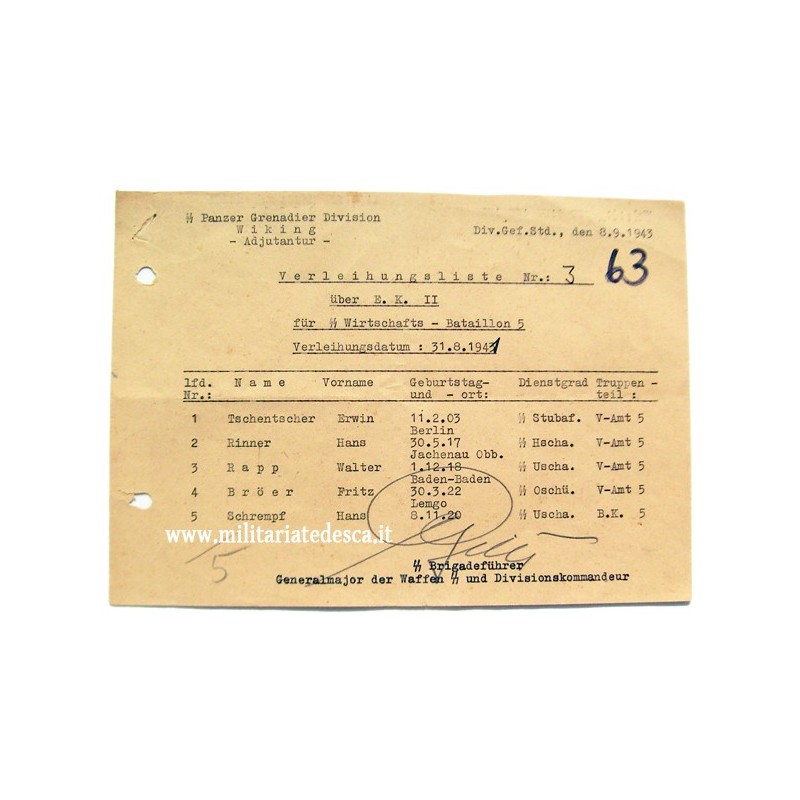 Amazing document signed by one of the most famous and highly awarded commanders of the Waffen-SS, Herbert Otto Gille. Gille was the first SS soldier awarded with the Oak leaves, Swords and Diamonds of the Knight Cross.

Furthermore, the name of the first soldier listed is Erwin Tschentscher, SS-Sturmbannfuhrer, who was tried in Nuremberg trial as war criminal.

The document bears the heading of the "SS Panzer Grenadier Division "Wiking" – Adjuntantur", is dated 8 September 1943 and was written in "Div.Gef.Std." (Division Gefechtstand or Command of the Division in the combat zone) when this was aggregated to the III.Panzer-Korps of the 8.Armee in the Dnieper basin. This is the "Verleihungsliste Nr.: 3" (Assignment List No. 3) of the E.K. II (Eisernes Kreuz II.Klasse – Iron Cross IInd class) for the "SS Wirtschafts - Bataillon 5" (food supply Battalion) of the division.

The first name on the list is that of the battalion commander, the SS-Sturmbannfuhrer Erwin Tschentscher. Born in Berlin on February 11, 1903, he attended public schools until 1919. Enrolled in the Nsdap on December 1, 1928, with the registration number 102547, he entered the Allgemeine SS on 1 May 1930 with the number SS 2447. After covering various positions in the Allgemeine-SS, he was transferred to the "Wiking" division of the Waffen-SS on November 30, 1940 on the day of its establishment under the name of SS-Division (Mot.) "Germany". He was assigned to the supply battalion, whose task was to provide the rations of food to the companies led by the then SS-Standartenfuhrer Heinz Karl Fanslau. During the period of unit training he was responsible for choosing the readings for the troops favoring those texts that incited racial hatred towards the Jews. This activity constituted a heavy indictment of the Nuremberg trial.

In mid-June the division, after completing the training period, moved to the Lublin area in Poland, to be then engaged in the Russian campaign. Tschentscher was accused of having actively participated in killings and atrocities against civilians when his unit was near Tarnopol in Ukraine, but this accusation could not be proved because, in the same area, operated units of the SS Einsatzgruppen, SD, Wehrmacht, Ukraine Police and others that could not be identified.

Promoted SS-Sturmbannfuhrer, he assumed command of the battalion and maintained it until October 1, 1943 when he was transferred to the "WVHA" (SS Wirtschafts und Verwaltungshauptamt), ie the Economic and Administrative Office of the SS) to whose command was the SS-Oberfuhrer Fenslau, formerly his commander in the "Wiking". He was appointed deputy head of the Amtsgruppe B and head of Office 1, with the task of directing all the activities related to the supply of food for the Waffen-SS and the Police at home that included about a million men.

Even 20/30,000 concentration camp guards were served by his office which had set up kitchens inside them. This cost him the second charge of having been aware of what was happening in the camps without participating in person. The tria,l held before the NMt (Nuremberg Military Tribunals) under the Allied Control Council (ACC) from October 1946 to April 1949, ended with a sentence of ten years of imprisonment issued on January 31, 1951. After that Tschentscher was released for having already served his sentence.

Affidavit concerning Erwin Tschentscher's career and positions in the SS and Waffen-SS, and his work in the WVHA (Deputy chief of Amtsgruppe B, Chief of Office 1 in Amtsgruppe B): Tschentscher affidavit

Brigadefuhrer Herbert Otto Gille, signer of the document, was one of the most famous commanders of the Waffen-SS and the German army in general. Born March 8, 1897 in Bad Gandersheim am Harz, Lower Saxony, after attending the famous military college of Gros Lichterfeld in Berlin which later became an important training ground for future members of the Waffen-SS, Gille participated in the First World War as an artillery lieutenant. He distinguished himself for his courage by conquering both degrees of the Iron Cross and the Cross of Honor 1914-18. When the war ended, in March 1919 he took leave, working for the next 15 years in the field of agriculture, managing several companies.

On May 7, 1931 he enrolled at the NSDAP (card number 537337) and on October 10 he entered the SS (No. 39854). On May 20, 1934 he enlisted in the SS-VT (SS-Verfungungstruppe), receiving the rank of Obersturmfuhrer and obtaining the command of a platoon. Three years later he took command of the 19. Machine-Gunner company in Ellwangen with the rank of Sturmbannfuhrer. He participated in the fighting in Poland as a battery commander of the SS-VT artillery regiment and in France where, promoted SS-Obersturmbannführer commanded the first battalion. In November 1940 he was called by Steiner to organize the artillery regiment of the new SS Division "Germania".

With the beginning of the operation "Barbarossa", Gille supported, with the fire of its guns, the rapid advance of the Wiking through Ukraine. On February 28, 1942, Gille was decorated with the German gold cross. Even during the offensive in the Caucasus, the Wiking artillery regiment accompanied the division's achievements. In Kraptokin, in Kuban, at a major railway junction, Gille's cannons managed to destroy a strong Russian column of about 4000 men. This brilliant action earned him the delivery of the Ritterkreuz (Knight's Cross). On November 9th the promotion to SS-Brigadefuhrer und Generalmajor der Waffen SS. After the fall of Stalingrad, the division was engaged in the Kharkov area to block the Soviet offensive south of the city. In May 1943, General Steiner left the Wiking command to take his place in the III. SS-Panzerkorps Command and Gille took over the command of the Division. Under his command the Wiking earned the respect of the German High Command as well as the Russians themselves. In the following months the Division continued to be engaged on the Dnieper front for the whole of 1943. The rapidity of the Soviet advance provoked the encirclement of a large number of Wermacht troops. The Viking Division and the Wallonien Brigade, led by Leon Degrelle, were trapped in the Korsun-Cherkassy pocket in an episode similar to that of Stalingrad, but they managed to break through despite losing 60% of the men. For this action Gille received, the first man of the Waffen-SS, the Knight's Cross with oak leaves and swords. A few months later the Red Army attacked again and once again the SS Panzer divisions were thrown into the fray. The Wiking and the Totenkopf divisions, gathered together to form the 4th SS-Panzer-Korps, under the command of Obergruppenfuhrer Herbert Otto Gille, repelled the Soviet attack on Warsaw. A year later, he was the first man among the Waffen-SS to be decorated with the Knight Cross with Diamonds.

He commanded the 4th SS Panzer-Korps in Hungary until the end of the conflict and then in Austria where he was taken prisoner and released three years later. In the post-war period, Gille ran a small bookstore and founded the Waffen-SS veteran newspaper called "Wiking Ruf". He died on December 26, 1966 in Stemmen near Hanover, almost simultaneously with his former comrades of the SS Sepp Dietrich, Georg Keppler and Felix Steiner.